HAMBURG, Germany – Footwear distributor Hamm Market Solutions needed to ensure this year’s fall / winter collection arrived in Germany on time from its supplier’s factory in South China’s Guangdong Province – or face having to dispose of 84,000 pairs of casual shoes at a major shed.

Werner Prigandt, the company’s logistics chief, knew it would be risky to move the shoes by sea, Hamm’s usual method, given widespread delays at congested ports and a shortage of sea containers.

Some European importers had turned to rail as an alternative, but Prigandt feared that he would still have difficulty obtaining sea containers for a train journey. Sending the shoes by air would be just too expensive.

So in July, Hamm’s supplier loaded the shoes onto 12 truck trailers. Eleven of the shipments arrived on time at the company’s headquarters in Osnabruck, northwest Germany, dusty but intact, allowing Hamm to distribute the shoes to stores last month.

“China-Europe trucks are independent of container availability as the load is transported in bulk or on pallets,” Prigandt said. “Although a truck remains stuck at the Sino-Russian border near Manzhouli due to a delay caused by a local COVID-19 outbreak, we are quite happy with the situation.”

Trucking has emerged this year as a happy alternative for European importers desperate for options.

Rail shipments from China to Europe have also progressed more slowly than usual, due to a combination of COVID-related lockdowns in China’s northwestern Xinjiang region and line work in Poland, two places through which most freight lines to Western Europe pass. This added an extra week or more to the shipping time.

At the same time, the rates for shipping a container by sea from Asia to Northern Europe are more than six times higher than a year ago, with the Freightos Baltic index hitting $ 14,492 last week.

Air freight rates between China and Europe, never a bargain, are 50% higher than a year ago, according to the Baltic Exchange Air Freight Index. It puts average net costs at 42.42 yuan ($ 6.63) per kilogram, down from the high of 48.31 reached earlier this month.

Trucking rates have also gone up, but for time-sensitive importers like Hamm, rates can be attractive. According to figures from German freight forwarder Doerrenhaus, truck delivery from China can be twice as expensive as by sea, but today takes a third to half the time.

A series of European logistics companies, including Doerrenhaus, Hellmann Worldwide Logistics and DHL International, have launched China-Europe trucking services in the second half of 2020, as the scale of the capacity shortage and shipping disruption is become evident. 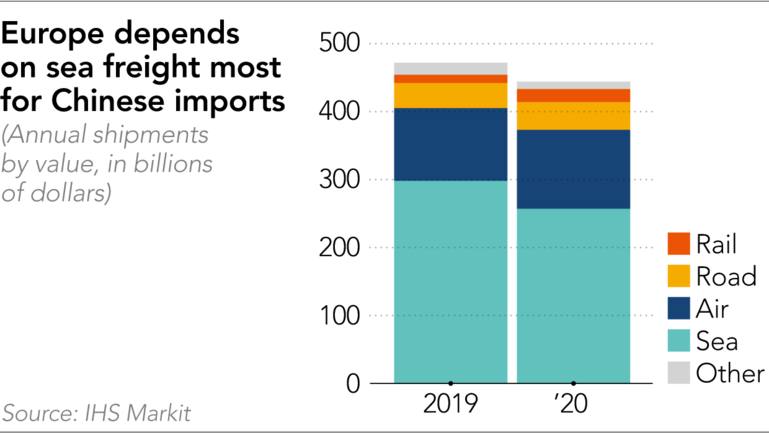 DHL now sends 30 to 50 trucks west on the road each week, while Doerrenhaus’s service frequency peaked at around 30 per month in June and July.

Hellmann and a number of other operators prefer to send trucks north from China’s coastal manufacturing centers to the country’s border with Russia. There, loads are transferred from Chinese trucks to those driven by Russian or Belarusian drivers who can then transport them to Western Europe.

“The Chinese highways leading to the borders are in excellent condition, and the Russian and Kazakh highways are good, making border crossings the only bottlenecks,” said Dieter Mauritz, head of truck solutions for China at Hellmann. “Everything is going very well towards Europe unless there is a case of COVID-19.”

Each truck typically carries either a standard shipping container or the freight equivalent packed in its trailer, limiting the size of shipments well below levels that can be sent all at once by sea or rail, which makes it a less carbon-efficient choice for shippers sensitive to environmental concerns.

As with Hamm’s shoes, Hellman is seeing high demand for shipping seasonal goods for Halloween and Christmas, as well as auto parts, household goods for supermarket promotions, and dangerous goods like lithium-ion batteries.

“Our customers are mainly suppliers of German discounters who fear being fined by their customers for missed deadlines if loads get stuck in container or rail transport,” said Adrian Boenisch, Managing Director of Doerrenhaus.

Despite the growing interest in rail transport in recent years, statistics compiled by research firm IHS Markit show that road freight from China to Europe has always overtaken rail transport. Last year, the EU and the UK together received $ 41 billion in goods from China by road, double the amount arriving by rail. 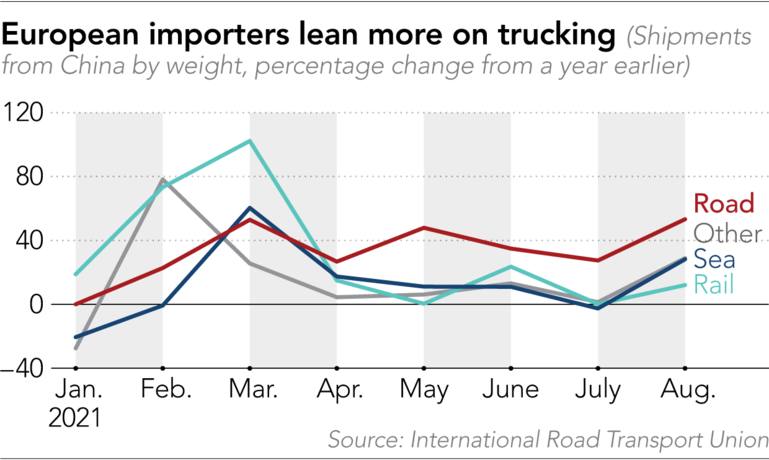 While shipping lost market share last year amid industry disruptions, it remains the dominant mode for China-Europe freight, especially when imports are measured by weight. Air freight, the main mode of transporting high-value goods, also remains well ahead of trucking.

But trucking has roared forward this year. According to the Geneva-based International Road Transport Union, EU imports from China by road, measured by weight, increased 33% in the first eight months of 2021, triple the overall pace.

Although European operators are now seeing some signs of slowing demand for trucking after the pre-Christmas shipping spike amid lower ocean and air freight rates, they expect interest continues until shipping returns to normal.

This, Mauritz said, “could take well over a year.”